What is Best For My Child: “Early Sampling” or “Early Specialization” With Sports? 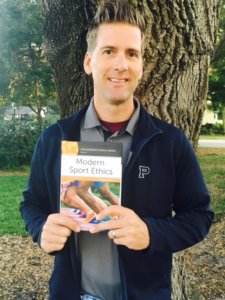 I am honored to have been included in Dr. Angela Lumpkin’s 2017 Edition of “Modern Sport Ethics”.

I was deeply honored to be a contributor to the 2017 edition of Dr. Angela Lumpkin’s Modern Sport Ethics, which is one of the nation’s leading textbooks for higher learning in the field of Sport Management. I co-authored the following scholarly article with Dr. Michael Sagas (Professor and Chair of the Department of Tourism, Recreation and Sport Management at the University of Florida):

The Ethics of Parents Choosing an Early Specialization vs Early Sampling Pathway for their Children in U.S. Youth Sports

The most recent national data available from the National Collegiate Athletic Association (NCAA) (Wimmer Schwarb, 2016) provided the most comprehensive insights to date on the developmental pathways used by elite youth athletes in the United States. Specifically, this research found that a majority of NCAA college athletes competing during the 2014-15 season chose to compete in a single sport as a youth athlete. These findings are quite alarming given that at the highest levels of professional sport, the majority of players have chosen to continue to follow a multi-sport pathway through their youth and high school playing years. For example, a vast majority of athletes drafted in the 2016 NFL draft (88.5%) were multiple sport athletes through high school (Branstad, 2016). Similar findings have been noted for Minor League Baseball players, and in studies of Olympic athletes (Gibbons, Hill, McConnell, Forster, & Moore, 2002; Ginsburg et al., 2014).

The decision to specialize is likely made jointly by those who influence the talent development process of youth athletes most attentively–youth sport coaches, the athletes themselves, and the parents of athletes (Holt & Neely, 2011).  To our knowledge, the motivations of parents to enable a single sport pathway through the current US pay-for-play youth sport model have not been subject to any scientific study. However, experiential data from media reporting on the subject suggests early specialization is often pursued by parents as a means to provide their child a distinct competitive advantage over his or her peers (Fletcher, 2015). Further, from our personal experiences as researchers in youth sports, we can say without a doubt that the biggest change in the youth sports over the past decade has been the push toward early and single sport specialization.

Early sampling can be defined as giving children between 6-12 years old the opportunity to sample various sports and high levels of play activities. Early specialization can be characterized as the inverse of early sampling, in reference to the number of sports an athlete participates in and the amount of play involved (Côté, Lidor, & Hackfort, 2009).  An early specialization pathway demands children choose only one sport, is characterized by high levels of deliberate and focused practice (rather than play), and often focuses on performance and winning at early ages (Burgess & Naughton, 2010; Côté, et al., 2009).

The research literature provides some support for the early specialization pathway. The strongest support is found in sports in which peak performance occurs in adolescence or early adulthood (e.g., women’s gymnastics). It also is safe to suggest that early specialization is likely the best path for athletes looking to achieve early age-group success. Another potential benefit of the early specialization pathway involves the environmental and psychological domains of development. Scholars have shown that “early significant incidents” during development can have an important effect on an athlete’s attitudes and perceived competence (Burgess & Naughton, 2010). These experiences can be very beneficial to the motivation of a young athlete while also excluding the late bloomer or underserved athlete who is not playing in the correct leagues or tournaments to get identified and selected (Horton, 2012).

Beyond the few benefits or specific contexts outlined, the majority of the literature suggests early specialization can actually have significant negative consequences on the development of an athlete. For example, studies have shown that an early specialization pathway can lead to increased injury, burnout, and drop out from sport (Gould & Udry, 1997), less enjoyment and higher rates of injury (Fraser-Thomas & Côté 2008; Jayanthi, 2015), social isolation (Wiersma, 2000); physiological imbalances (Dalton, 1992); shortened careers (Côté et al., 2009), and a limited range of motor skills (Wiersma, 2000). As is evident in a recent consensus statement of more than a dozen scholars and experts (LaPrade et al., 2016), the research on this topic is quite clear; the early specialization pathway fails to consider many of the physical, psychological, and social costs to young participants, especially when considering the development of a young athlete through adolescence. 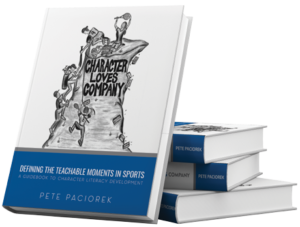 Check out my book on Amazon!

Youth and amateur sport, if facilitated appropriately by coaches, administrators, and parents, has the potential to teach life skills in order to positively influence and prepare our youth for future success (Broh 2002; Camiré et al., 2013). Unfortunately, given the findings demonstrating an increase in early specialization pathways of current NCAA and youth sport athletes, we contend youth sport parents of today likely adhere and promote ethical egoism. This ethical frame is a normative theory that posits how one ought to act or behave. Ethical egoism subscribes to the belief that there is only one ultimate way to act, and that is out of one’s own self-interests. Acting solely out of one’s own best interest is the only way to truly know and promote one’s self (Rachels, 2012).This ethical mindset is one likely leading to the incessant quest for immediate personal accolades, awards, and the belief these behaviors will lead to the ultimate prize, a college athletic scholarship (Farrey, 2008). Subsequently, the actions resulting from the self-interests of parents are unfortunately pushing deliberate play and early sampling to the sidelines.

Farrey, T. (2008). Game on: The All-American race to make champions of our children. ESPN.

Fletcher, M. (2015). The case for the multi-sport athlete: How youth sport lost its way. Molly Fletcher.com. Retrieved from https://mollyfletcher.com/the-case-for-the-multi-sport-athlete-how-youth-sports-lost-its-way/

Previous: Coaching & Promoting a Grateful Heart in Our Youth

Next: How can we bring relevance back to sports for our children?