How to capitalize on the “teachable moment”

I See You Working, Coach!

A local Bradenton, Florida youth coach recently made the most of a “teachable moment.” In my community talks around the county, I have been asking parents and coaches in attendance to write me in order to share stories of “the good, the bad, and the ugly” of youth and amateur sports. My emphasis prioritizes the good, but there is much to learn from the bad and ugly as well.

The intent of my Character Loves Company blogs is to be able to highlight coaches in our local communities, as well as across the country who are making a positive difference in the lives of our children by building a stronger foundation in character. As more and more people begin to find out how passionate I am about the topic of character development and the “teachable moments” in sports, many powerful and inspiring stories are being shared with me.

The following story was shared with me by a parent who witnessed the “teachable moment” first hand.

He shared how a local coach, Josh Conn, was coaching a youth baseball team of seven and eight-year-old’s playing at GT Bray Recreation Center. While there were countless learning opportunities that inevitably went unnoticed throughout the game, it was during the post-game handshake period that the “teachable moment” was capitalized on.

There was an interaction of disrespect as the young boys were shaking hands. As is often the case, one team was dejected after the loss, while the other was triumphing. One young boy’s hat was purposely knocked off his head and into the dirt by a player on the opposing team.

Coach Josh Conn seized the learning moment for both teams. With the support of the other team’s head coach, Coach Conn brought both teams together and he addressed the issue head on. A “teachable moment” in respect for others leads to a valuable life lesson. 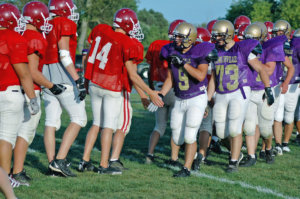 This seemingly insignificant exchange between young boys at the culmination of a hard-fought game could have been sluffed off as “boys being boys,” despite the blatant disrespect. However, Coach Conn and the other coaches present that day seized the moment and taught their players a valuable life lesson.

I see you working, Coach Conn!

Previous: A Lesson from the Chicago Cubs: “Isn’t This Fun?”

Next: Coaching & Promoting a Grateful Heart in Our Youth